Mom and Dad took me to the bark park again. I couldn't believe it! Mom said that she and Dad would try to make it an every Sunday early morning event as long as the weather holds. She said it would be good for both her and Dad. Mom said exercise was good for her cause it helps keep her die-a-beet-is (not sure what that is exactly) under control.

Unfortunately, that Baxter dog was there wanting to jump my bones. I got tired of it and snapped back. Another female brindle dog also became Baxter's target and a fight broke out. Baxter's parents just thought that was so cute! (NOT). I also met a very nice Rottweiler named Nike. Nike's dad fetched my Mr. Ring as I had dropped it in my excitement to sniff up Nike. Nike had a brother/sister along (white terrior type dog) who had a red sweater with skulls on it. Unfortunately my Dad didn't think to take a picture of Nike. He took this one of me though. 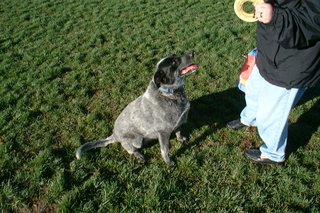 Dad said that next Sunday we would be there earlier. The bark park opens at 6:30am. We were there this Sunday at 8:00am. Coming an hour earlier will, hopefully, keep us from running into Baxter and his family.

After the bark park, we came home and had breakfast. I got some of Mom's cheesy scrambled eggs. I just love them! I also supervised Dad putting in a new front door handle. Mom has been complaining for months that she couldn't get the door locky thing to turn because of her arthritis (Dusty Doodles has offered his services to woo it away). Well, sometime last week Dad had a hard time trying to get the locky thing to turn and so he went out and got a new one at Home Depot. The handle is even curved to make it easier for Mom.

We had some excitement last week. Mom and Dad got caught in a hail storm coming home from a movie. It hailed in my yard too. It looked like little pills but was cold. It was thundering and lightning too and Dad said Mom kept shreeking everytime it lightninged. He finally yelled at her that he was doing his best to get her home as quick as possible so stop shreeking! Mom said she then just whimpered. When they got home, I was throwing myself against the sliding glass door and Simon Lard Butt was standing on my crate and beating on the window with his paws to let him in NOW. I slept inside that night to keep an eye on Mom. Even Worf and Simon were inside.

Well- I guess that is about it for now. I read that Opy's family are without electricity and there are bush fires near there. Let's say a quick doggy prayer that everything works out OK for them. Oh- and congrats to Butchy and Snickers Mom for having her dog clothing site on the Doggie Wire e-newsletter!

I didn't think it would happen, after all, mom has said we could go before and we didn't. This time, it was Labor Day and both mom and dad had off. Mom went out to the city web site and checked what time the park would be open. She found out that we needed to bring our own drinking water. She and dad went to Petsmart on Saturday and got some Mutt Mitts (to pick up poop) in case the park was out. She got a water bottle holder with cup at the bottom. I have my own bark park bag (an old Snoopy one mom had laying around). She put everything into the bag and added Mr. Ring and the Gooberlicious snacks for good measure.

This first picture is of me in the back seat on the way to the Bark Park. 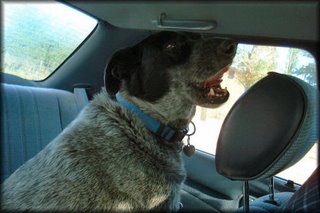 The park was muddy in places because we have had so much rain and the sprinklers are set to water overnight also. We walked a little bit with my leash on as mom & dad didn't know how I would act. Finally dad took the leash off. 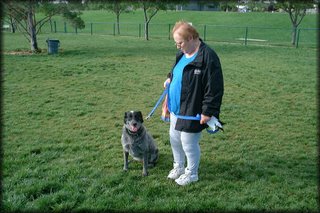 Dad was very nervous and made me be slightly defensive when doggies got too near me. It was still OK though. I met a brown dog (don't know kind) named Baxter that kept wanting to jump on me even though I told him that I'm NOT that kind of dog! I met a beautiful lady greyhound name Sylvia. She was very nice to me. I met another couple of little Westie dogs but didn't catch their names. Dad threw Mr. Ring for me several times. Mom tried to get me to drink some water but I didn't want to. 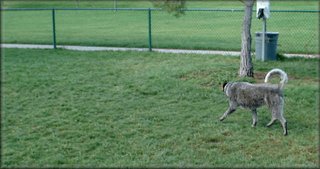 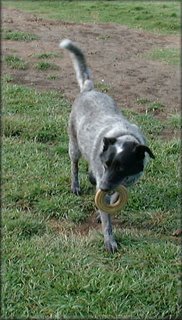 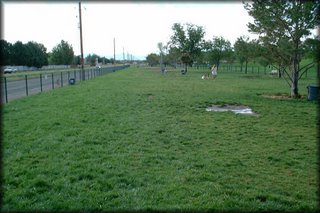 It was cool and cloudyish but we stayed about 45 minutes. On the way home, we stopped by a Sonic Drive In (burger type place) and mom and dad got limeades. I didn't want anything. When we got home, all of us were tired. Mom fixed breakfast and I had some egg and toast. Both mom and dad looked like they would be ready for a snooze any minute. I am tired too. Yesterday I supervised dad in the yard and my arthritis was bothering me last night. Mom gave me some aspirin in a hot dog piece. I think I am going to need one of those tonight also. Mom and dad agree that we are going to go again. Everyone had a good time!